"It started with Eragon... It ends with Inheritance" "Not so very long ago, Eragon—Shadeslayer, Dragon Rider—was nothing more than a poor farm boy, and his dragon, Saphira, only a blue stone in the forest. Now the fate of an entire civilization rests on their shoulders."

"Long months of training and battle have brought victories and hope, but they have also brought heartbreaking loss. And still, the real battle lies ahead: they must confront Galbatorix. When they do, they will have to be strong enough to defeat him. And if they cannot, no one can. There will be no second chances."

"The Rider and his dragon have come further than anyone dared to hope. But can they topple the evil king and restore justice to Alagaësia? And if so, at what cost?"

"This is the much-anticipated, astonishing conclusion to the worldwide bestselling Inheritance Cycle."

Inheritance starts out during the middle of the siege of Belatona. In the midst of the battle, Saphira is nearly killed by the Dauthdaert Niernen, a spear from Du Fyrn Skulblaka created to withstand and kill dragons. Eragon and Arya find Lord Bradburn and subdue him, taking control of the city. In the aftermath they are offered an alliance by the werecats, which they accept. That night, Elain's baby, Hope, is born with a cat lip, which Eragon sings through the night to heal.

Roran is sent to take Aroughs, avoiding a two fronted war. He manages to cook up a scheme to force his way into the inner city and the keep beyond. In the process, his friend/magician Carn is killed. Roran takes the city and then later rejoins the Varden at Dras-Leona where they make plans to attack that city. Jeod conveniently finds references to an incomplete sewer system under the city and Eragon leads a group into the city to open the gates for the Varden. After being discovered by soldiers, one of Blödhgarm's spellcasters, the-previously-unnamed Wyrden, is killed in a trap. Eragon and Arya are captured by the priests of Helgrind to be fed to their Ra'zac eggs. Angela and Solembum rescue them, during which Angela reveals she is in possession of the sharpest blade in existence, Albitr (which she calls 'Tinkledeath'), killing most of the priests in the process. Eragon defeats Murtagh and Thorn with the use of the energy stored in the ring Aren and the Varden take control of the city. Murtagh and Thorn attack the Varden camp and take Nasuada prisoner, which has surprisingly little effect. In the absence of Nasuada, Eragon is appointed the leader of the Varden as they march towards Urû'baen.

The Rock of Kuthian and the Vault of Souls[]

After Eragon is made leader of the Varden, he decides to find the Vault of Souls. He visits the werecat Solembum for further information on the Vault. Solembum at first refuses to disclose more information about the Vault of Souls, but Eragon convinces him to elaborate. Solembum reveals that soon after the Fall of the Riders, the entire werecat race was told that if another Dragon Rider not under Galbatorix's influence or in his service appeared, they were to advise the Rider to look under the roots of the Menoa tree for a weapon and inform them of the Vault of Souls. Heeding Solembum's advice, Eragon, Glaedr, and Saphira set out for Vroengard, where they discover their true names so they can gain access to the Vault of Souls. Descending into the Vault, the three find a massive cache of Eldunari, along with over two hundred dragon eggs. The leader of the Eldunari, Umaroth, once a white dragon bonded with Vrael, tells Eragon and Saphira of how Oromis and Glaedr were instrumental in saving the dragon eggs and the Eldunari (they convinced the wild dragons to give up their eggs for safety, and then gave 26 of those eggs to the Riders).

Eragon departs from Vroengard with all but a few of the Eldunarí to protect the eggs remaining in the Vault. Upon leaving, all knowledge of the eggs' existence is wiped from the minds of Eragon, Saphira, and the Eldunari accompanying them so that Galbatorix cannot make use of that information.

Eragon leaves for Urû'baen, which is under siege by the Varden. He is accompanied by Blödhgarm, the ten remaining elven spellcasters, Arya, and Elva. After a deceptive scheme, they break into Galbatorix's citadel. Eragon then tries to locate Galbatorix and progresses through a series of traps, while Blödhgarm and the ten elves are captured before finally locating Galbatorix in a huge chamber. Galbatorix subdues the three of them and tells them that he has learned the true name of the Ancient Language and thus has true power over them and can defeat the Varden when he sees fit. Eragon is then forced to fight Murtagh. They clash, and Eragon tricks Murtagh and sinks Brisingr into his belly. After being defeated, Murtagh realizes that his true name has changed. Murtagh then attacks Galbatorix, using the Name of Names to temporarily paralyze Galbatorix's magic and stripping Galbatorix of almost all of his wards. This allows Eragon to cast a spell using the energy of the Eldunarí to make Galbatorix understand his crimes. As it is a spell with no words, and only a communication rather than an attack spell, Galbatorix is unable to defend himself and is crippled by it. Although he makes an attempt to invade Eragon's mind, Murtagh overpowers him and Arya fatally stabs Shruikan in the eye with Niernen. Galbatorix is then stabbed in the stomach by Eragon. In retaliation, Galbatorix tries to kill everyone in the room by "unmaking" himself and becoming pure energy in a huge explosion. However, Eragon uses the energy from the Eldunarí to protect himself and the others. The downfall of Galbatorix is mainly due to the assistance of Murtagh and Thorn, who are able to break free of their oaths to Galbatorix due to dramatic changes in their identities. During Nasuada's captivity at Urû'baen, Murtagh assisted her to the best of his ability in resisting Galbatorix, because of the love he had fostered for her over the many months since he had met her, and it was this love that was largely responsible for his identity change. Free for the first time since being bonded together, Murtagh and Thorn fly north to let their hate and rage cool down, and to rethink many things.

After Galbatorix's demise, Nasuada becomes the Queen of the Empire. Arya becomes Queen of the Elves after the death of her mother to Galbatorix's general Lord Barst during the battle. She also resumes her role as the courier for the newly rescued green dragon egg, which soon hatches for her. Arya then becomes a Rider and names her male dragon Fírnen.

With the threat of Galbatorix removed, Eragon and Saphira are able to remember the location of the hidden eggs, and they work together to find a suitable place to house the now numerous Eldunari (from both Galbatorix's collection and the Vault of Souls) and to accommodate a new order of Riders. During this process, Eragon also solves the problem of binding all the races together, by reworking the magic of the land to include both the dwarves and the Urgals in the bond between riders and dragons, meaning that dragons can now hatch for an Urgal or a dwarf.

In the end, Eragon decides that there is no safe place to raise/train dragons and their Riders in Alagaësia. With the approval of all the leaders of the various races, he elects to transport all the Eldunarí and dragon eggs to a new location (in the east) save two, one of which is sent to the dwarves, and the other to the Urgals, if neither egg happens to choose a Rider, they would swap places. Eragon and Arya realize their true feelings (love) for each other and he offers Arya the chance to accompany him down the river and away from Alagaësia, and to help train the new Riders. She declines because of her duty as the elves' new queen. With heavy hearts, Eragon and Saphira, depart Alagaësia. The book ends with the envisioned scene mentioned in the previous books of two people getting on a boat (Eragon and Arya) and sailing away while two dragons are flying overhead and a man on the beach (Roran) yells at his loss. Arya then flies off with her dragon. At first, Eragon weeps for all that he is leaving behind, but in time, he comes to realize that he would have another chance at life in his new adventure to raise/train the next generation of Riders and their dragons. With that in mind, he looks forward to his new life, "a life with dragons and Riders".

Publishers in other countries[]

A list of chapters with their respective point of view.

Brisingr contains a dedication from Christopher Paolini to his family, friends, publishers, editors and fans. 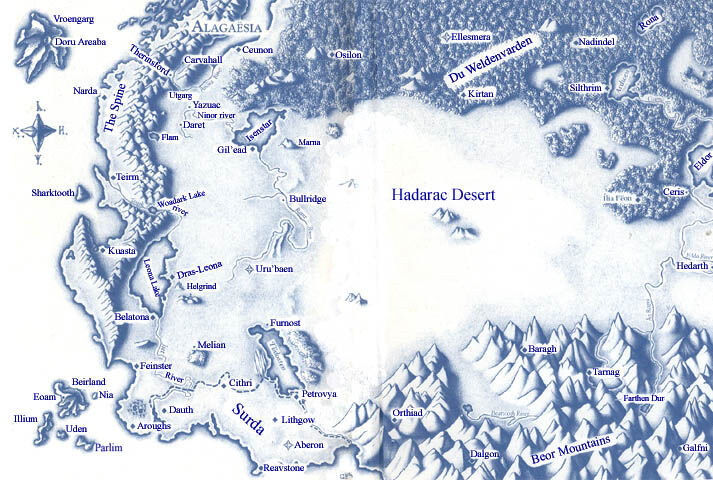 Note: The map is accurate for times up to and during the early Rider War.

Inheritance has received mixed to negative reviews, criticised due to unresolved plot threads, derivative characteristics of Star Wars and The Lord of the Rings, and heavy use of deus ex machina. Richard Marcus of the Seattle PI said that "Paolini clutters up the book with page upon page of battles that could just as easily taken place off stage" and that "the last hundred or so pages of the book are spent in a very awkward attempt to tie up all the loose ends". He also says that the main resolution is that "In fact by wasting so much time on insignificant details along the way, the final confrontation with Galbatorix when it comes feels rushed. Even worse, discovering the location of the Rock of Kuthian and the Vault of Souls feels incredibly contrived." However Shelby Scoffield of Deseret News called the book "a sophisticated novel" and "a sense of closure to a truly great series", but criticized Paolini's use of "long and boring details"

Deleted Scenes and other Extras[]

The Deluxe Edition of Inheritance features at the end a deleted scene from the main text of the book. The scene features a letter from Jeod detailing life after the conclusion of the Rider War.