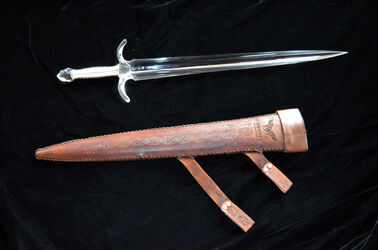 Tinkledeath, Albitr in the Ancient Language, was a unique weapon owned by Angela the Herbalist. Described by Angela as "the archetype of an incline plane", it was the sword's unique design that made it so sharp. It was a sword made out of "neither metal nor stone" and was sharp enough to easily slice through anything . Indeed, Angela claimed that it was the sharpest blade in existence, so it seems the blade was crafted by magic.

She named it Tinkledeath because of the sound it made when she tapped it. Tinkledeath was shown to be able to cut through 4 inches of granite as if it were paper and able to slice a man in half. Eragon used the weapon for a time under Dras-Leona, but did not feel comfortable with it.

Tinkledeath also had a scabbard that was made out of the same material.

The name "Albitr" (all-bit-ur) was said to mean "exactly what it sounds like" by Angela, so it could mean that Albitr means "all bite(r)", or perhaps, "all wounding".

The blade could possibly be a reference to "vorpal weapons" from some tabletop and video games.

Angela's blade might also be a reference to The Subtle Knife from Philip Pullman's His Dark Materials, who Paolini has said before influenced his writing.

Not much is known about Tinkledeath's history, much like Angela the Herbalist, but it appeared that she was very comfortable with it and may have had it for a long time. It may be made from dragon egg shell, due to its strength and the noise it makes when struck.

Retrieved from "https://inheritance.fandom.com/wiki/Tinkledeath?oldid=106133"
Community content is available under CC-BY-SA unless otherwise noted.