The Urgals (or Urgralgra in their language)[1] are a race of sentient creatures that inhabit Alagaësia. In the first book they had been forced by Durza into the service of Galbatorix. They are considered evil by most humans, but are not inherently so. Though most are uneducated in the normal definition of the word, they make up for this with brute strength, as well as exceptional combat and command skills. They were used as expendable "shock troops" by Galbatorix's army. The Urgal language is simple and guttural. Only a few phrases are known to outsiders and most of those are related to war and combat. Angela, the herbalist, is one of few who can speak their language. As with other races, they are capable of using Magic, to the ignorance of both humans and dwarves. With the fall of the Broddring Empire the Urgals were made Dragon Riders along with the dwarves.

Urgals are roughly humanoid in appearance, with grayish skin, bowed legs and thick arms. They have yellow, piggish eyes, claws on their hands in place of nails and a pair of long, twisted horns protruding from above their ears. Urgals can be anywhere from six to nine feet tall: an Urgal's height depends mostly on heredity factors. Urgals usually have seven toes on each foot as dwarves do, a similarity that Eragon observes when traveling with Nar Garzhvog, although both rather believe it be the creativity of their deities than any possible relation.

Female Urgals are somewhat slimmer than their male counterparts, though just as tall. While still massive, their horns tended to be shorter and more delicate. Urgal children often accompanied the dams. Children who have not yet grown their horns look surprisingly similar to human children (excepting the difference in skin and eye color).

Although Humans and dwarves think of them merely as bloodthirsty beasts, Urgal mothers care well for their young. Their entire culture revolves around violence and physical strength: one's prestige being directly connected with how many kills one had or how many opponents they had beaten in combat, as well as their size and the size of their horns. Their horns are a sign of pride, if an Urgal were to lose his horns it would be equivalent to being stripped of his being and manhood.

While Urgals have, on average, lifespans similar to humans, they are stronger and faster, and can run for much longer distances than any human or dwarf. This, as can be observed, makes them subject to tales of beasts among other species.

The Urgals originally came from the same land as the elves. They followed the elves over the sea to Alagaësia, "like ticks seeking for blood", in the words of Brom. However, Heslant the Monk noted in Domia abr Wyrda that considerable skill would be required to build and sail ocean-going vessels, so perhaps they were capable of some sophistication. Upon landing, around three centuries after Du Fyrn Skulblaka, they signed peace treaties and indeed the peace was kept for two decades before the Dragon Riders drove out the violent Urgals from much of the land. They were looked down on by the other races for their distasteful appearance and for their love of warfare.

During the era of the Riders, a group of Urgals ambushed the Rider Galbatorix and killed his Dragon, Jarnunvösk, with a Poison dart. This triggered the Second Dragon War and the rise of the Broddring Empire.

Just prior to the Rider War, Durza the Shade, one of Galbatorix's most trusted servants, cast a binding spell upon the Urgal race, forcing them to serve the Broddring Empire against their wishes. The clans united, as was not their way and were forced to do Galbatorix's bidding until he decided to dispose of them at his leisure.

Urgals fought in many major battles during the war. They captured both Arya and Eragon. They brought both their captives to the fortress city of Gil'ead.

Later, when Eragon killed Durza during the Battle under Farthen Dûr, the spell was broken and the Urgals were freed. They then turned on each other.

The Urgals began to hate the Broddring Empire and Galbatorix for the sake of the wrong which had been done to them. The hatred became so strong that a group of Urgals under Nar Garzhvog allied themselves with the Varden at the Battle of The Burning Plains, hoping to exact vengeance for the wrong done to them. Afterwards, many other Urgals joined the Varden. Only a few tribes still refuse to work with their old enemies. At the end of the war the Urgals, along with the dwarves, were inducted into the spell so they could become Riders.

The Urgal culture is centered around warfare: the societal ranks of both males and females are decided by their ability to kill. Urgals are a tribal race and each tribe is under the authority of a warchief, or "Nar" in the Urgal tongue. These tribes often fight each other as well as Human settlements or cities. Urgals are known to fight both alone and in groups. The terms for young Urgals is cub, an adult male is a ram and an adult female is a dam. Male Urgals wore loincloths, though during battle they donned metal and leather armor.

Urgal villages are well-hidden and well-protected, residing in well-defended caves in the central Spine region Humans avoid. The villages contain carved animal motifs from logs which stand vertical, which the Urgals believe will scare off animals that the motifs represent. Urgal families weave the Namna, an ornate piece of cloth. The namna hangs outside the family's cave and describes their own history. When a male Urgal cubs' horns begin to show (or bud), he must go into the wilderness and kill an animal to prove himself. Most young rams hunt mountain goats, wolves, or other less threatening prey. Nar Garzhvog, however, became warchief of the Bolvek Tribe by strangling an Urzhad, a gigantic cave bear, to death when he came of age. In Brisingr, he fashions the Urzhad's stomach into a makeshift pot to cook venison stew.

The Urgal diet consisted of mainly meat, venison, Nagra (giant boar), Bear, Fowl and wild roots, berries and leaves. The meat was usually roasted or put into a stew cooked in a leather pot using hot stones with tubers and leaves. They make a type of wine from berries and tree bark. Humans such as Eragon believed it to be even stronger then Dwarven brew, and it tasted like cherries gone bad.

Just as Humans hated Urgals, Urgals hated Humans. Urgal legends portrayed the Human race as evil and corrupt. This age-old hatred led to many wars, with heroes and villains on both sides. Urgals have signed peace treaties with other races, but they rarely last, as the entire Urgal culture is based upon war. The young rams must win a mate by proving themselves in combat and they often attack those with whom they have treaties.

Eragon endeavored to enter a lasting peace with the Urgals, but finding treaties to be an unreliable method, decided on a new approach. First, he advised the Urgals to enter into a series of interclan games (similar to real-world sports, such as the Olympics) in which the young Urgals can compete. This would allow them to display their skills, as well as earn status and mates, without resorting to full-scale battles, or war. The clan leader to whom Eragon spoke was receptive, but felt that the Urgal nature would not allow this to last forever. Accounting for this, Eragon also chose to amend the spell which bound the Riders to include the Urgals as well as the Dwarves, allowing them to become Dragon Riders. This would have the added benefit of allowing the Urgal culture to "mature" much as it had done with the Humans in the past.

Two ranks in Urgal society are the rank of "Nar" (chief) and "Herndall" (female leader). Individuals who bore these titles were treated with great respect. The Kull leader Garzhvog has the title Nar. Also, the Urgals are very considerate of titles for other non-Urgals, like Ajihad and Nasuada as Nightstalker, Eragon as Firesword and Saphira as Flametongue. When one wanted to pay respect to another, they would look up and bellow, showing their throat, before butting heads with them (which was avoided by other species).

Even though their violent nature may seem utterly senseless at first, Urgals had codes of honor when it came to the reasons behind killing. If an allied Human were to kill an Urgal out of self-defense or because Urgals killed people close to him, they would accept it. However, if a Human were to kill an Urgal without a reason to do so, this would cause a great uproar among them.

Urgals are generally stronger and more deadly than the average human. However, the tallest and most powerful of the race are the Kull, who stood above eight feet tall on average and had legs like tree trunks. Kull seem to be trained Urgals, though it is not clear just how they grow to be Kull or "normal" Urgals. In Eragon's sweep of Garzhvog's memories in Eldest there is mention that it is due to the "Old Blood in his veins," but no further clarification is made. In Inheritance, when Eragon visits the Urgal village near Fläm Lake, he notices that Kull children are visible among the young Urgals and it appears there was no pattern that determine which parents bore Kull and which did not.

The Bolvek were a tribe of Urgals, including some Kull, who were lead by Nar Garzhvog. Like the rest of the Urgal race, they served Galbatorix, through Durza, at the start of the Rider War. After the spell was broken at the Battle of Farthen Dûr they wandered the land for months and later allied themselves with the Varden just before the Burning Plains.

All the Urgal species shared the same language. Many Urgal words were deemed unpronounceable by other races.

In the Eragon film, the Urgals do not have the horns, gray skin or yellow eyes they were described as having in the books. Instead, they simply resemble large, brutish humans covered in warpaint with red, cat-like eyes. They are portrayed as barbaric, primitive Humans.

Original concept art showed Urgals almost exactly as described in the book, but director Stefen Fangmeier said that "it would either have to be a lot of make up or a lot of money." When the Urgals were established he was considering placing CGI horns on them but in the end he said it wasn't necessary to do so. The change of the Urgals made many fans very angry.

In the Eragon video game, there are three types of Urgals. The normal of the race resemble the Urgals from the movie. The Kull more closely fit the description of Urgals given in the book. The Berserkers were also introduced in the game.

Paolini's Urgals bear great resemblance to Tolkien's Orcs, with characteristics similar to that of Urgals. In addition to the Urgal connection, the series also features Kull, which are the counterpart of Uruk-hai, an advanced hybrid breed of Orcs. However, unlike the Uruk-hai, the Kull were pure Urgals, whereas the Uruk-hai were a cross breed of Orcs and Goblin-men.

The description of Urgals in the book is also very similar to that of qunari in the Bioware game Dragon Age II, as they both have grey skin, horns, yellow eyes, and their common war gear is little more than a loincloth.

"Kull" is also the name of a character created by Robert E. Howard, an "Atlantean" and ancestor to Howard's character Conan. 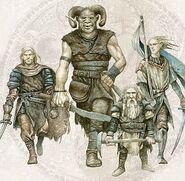 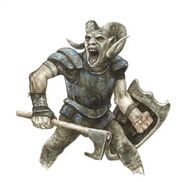